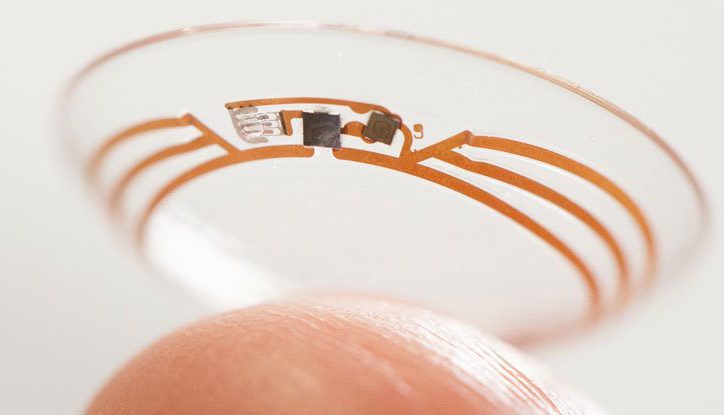 Within few years the internet will be in our contact lens.  Sony, Samsung, Google are all having a research and development program dedicated to this project far more intrusive compared to the google glass. Prototypes are developed since early 2000’s.

This is another exemple of a technologie coming from the military–industrial complex. In 2012 the Defense Advanced Research Projects Agency (DARPA), together with Washington-based Innovega, is reported to be developing contact lenses that enhance normal vision, by allowing a wearer to view virtual and augmented reality images without the need for bulky apparatus. Instead of using oversized helmets, digital images are projected onto tiny full-colour displays that are very near the eye. These novel contact lenses allow users to focus simultaneously on objects that are close up and far away.

In other words, this could enable the use of tiny portable displays while still interacting with the surrounding environment. Developed as part of DARPA’s Soldier Centric Imaging via Computational Cameras (SCENICC) program, the objective is to give wearers better situational awareness in intelligence, surveillance, and reconnaissance (ISR) activities – greatly enhancing their security and survivability. Innovega plans to begin low-volume production for the defence community in 2014.

Consumer versions may become available later this decade. Imagine the number of applications you’d get from such a device – especially when utilising the vast power of cloud computing. Terminator-style vision would give you access to a wealth of information about your surrounding environment. It would also enhance gaming and movie experiences.